FUELing Youth with the Sun 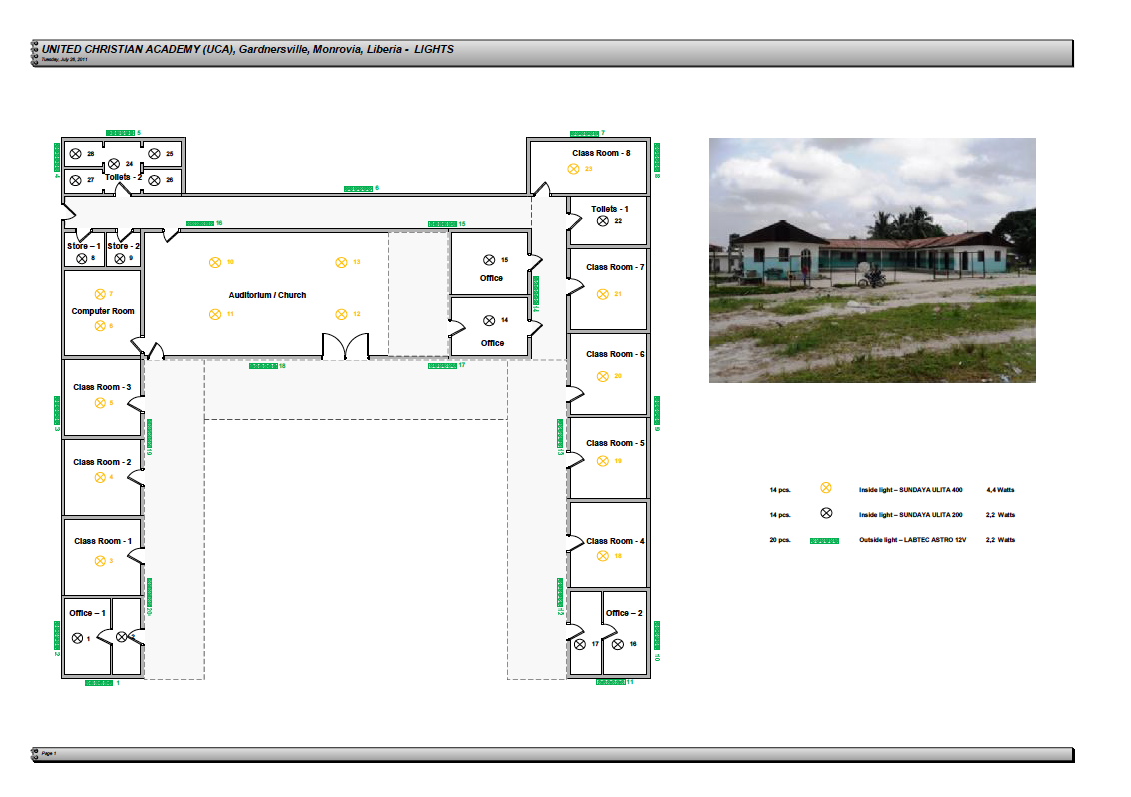 Layout of UCA illustrating where the panels have been placed

Electrifying a rural area is more than a matter of simple illumination. Bringing light to isolated villages spurs economic development, makes that area safer for its residents, allows for increased productivity, and enables greater possibilities for students. A lack of electricity limits Liberia’s, and indeed the rest of Africa’s, capacity for productivity and progress: out of Liberia’s population of 3.7 million, only 2,000 homes are an electrical grid. That’s a lot of darkness.

Africa is simultaneously the world’s brightest and darkest continent; many African countries receive 325 days of sunlight on average, yet the continent as a whole generates only four percent of the world’s electricity. What’s more, where there do exist national grids electrified via traditional fuel-guzzling power stations, the continent is plagued with frequent power outages caused by the lack of maintenance and general sustainability.

It is one of FUEL Youth’s goals to harness the power of the sun and equip Liberia with schools and communities that are reliably lit. Receiving over 1600 hours of sunlight annually, solar capacity in Liberia is incredibly high but a lack of infrastructure and high installation costs prevent the region from realizing its true potential. Luckily, as solar technology becomes cheaper and more accessible, it is becoming clear that it is the energy source to invest in. The key here is sustainability (in every sense of the word) and taking advantage of Liberia’s sunny disposition. Solar power as a renewable energy source is sustainable for the community and for the earth. And after the initial costs of materials and installation, solar panels are economically feasible; in comparison to traditional electrification, electricity bills by means of solar energy are extremely cheap. Success of similar projects is evident in Liberia’s West African neighbors: rural electrification via solar energy has effectively lit up eighty villages in Senegal and 150 communities in Mali. It is clear that Liberia should follow suit.

The electrification of FUEL Youth schools via solar energy is an exciting prospect. Electricity enables night classes for adults (over forty adults currently attend night school at UCA), a computer library for the community, more efficient school administration, and a safer and more secure community at nighttime. In May 2012, FUEL Youth completed the installation of a system of solar panels for the United Christian Academy (see the image above). This system provides power to a series of interior and exterior high-efficient lights throughout the school. The best part is, the setup is scalable so that FUEL can make additions in the future, and adding more panels and wiring will allow an AC current to power high-efficiency laptops. FUEL also plans to make solar electrification a key component of the new Messima school; as building of the school progresses, well-lit classrooms and school grounds become more of a reality. Overall, these solar panels will change the way the community approaches education and will enrich the student experience. They will allow more reliable access to knowledge, which in turn will improve the livelihood of the community as a whole.